The annual LMS pilgrimage to Glastonbury took place on Saturday 7th September 2019. The day began with Solemn High Mass in the Shrine Church. Dom Bede Rowe was Celebrant, with Father James Bradley, of the Ordinariate of Our Lady of Walsingham, as Deacon, and Dom Anselm Redman as Subdeacon. Charles Bradshaw acted as MC, and the other servers came from around the Diocese 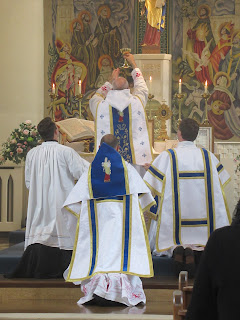 The Mass was a votive Mass for Our Lady's birthday, this being the Saturday nearest to the Feast on the 8th September. In his sermon, Dom Bede pointed out that Our Lady had been venerated in Glastonbury since the earliest days of Christianity, and is still honoured around the world, despite all the opposition and persecution that the faithful have suffered. 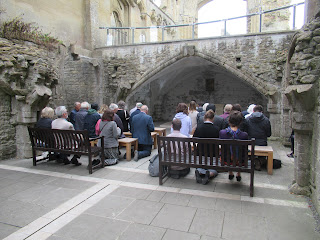 Mass was followed by lunch in the parish hall, after which we crossed the road to the ruins of the ancient Abbey to pray the Rosary in the crypt of the Lady Chapel. The day finished with an hour of Adoration of the Blessed Sacrament, and confessions, followed by Benediction.

We would like to thank all those who helped to make this pilgrimage possible, in particular Dom Bede Rowe, the Rector of the Shrine and Celebrant of the High Mass, the other Sacred Ministers, Fathers Bradley and Redman, MC Charles Bradshaw, and the Shrine administrator, Kim Woolmer.

Newer Post Older Post Home
Subscribe to: Post Comments (Atom)
Welcome to the information blog about traditional Catholicism in the Diocese of Clifton. We hope to provide basic information about the Masses available in our Diocese, and posts on Catholic history and culture in this area.
If you want any more information, please do contact us at clifton@lms.org.uk.