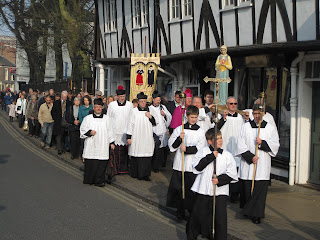 The Bishop of Middlesbrough, Rt Rev Terence Drainey, led a procession through the streets of York, as part of the Latin Mass Society’s 2nd Annual Pilgrimage to York in honour of St Margaret Clitherow on Saturday, 24 March. This followed a Solemn Mass in the Extraordinary Form at St Wilfrid’s Church at which Bishop Drainey had presided at the Faldstool, and which attracted pilgrims from across England and Wales and overseas. The music was provided by the Rudgate Singers who sang a Mass setting by contemporary composer Jeffrey Ostrowski and pieces by Victoria, Bruckner and Scarlatti.

During the Mass, the bishop preached on the danger posed in contemporary society by moral relativism. ‘This relativism seems to permeate our world today to such an extent that it is part of the cultural and societal air that we breathe. If we are not on our guard it will taint us and affect us. It is an evil about which our Holy Father, Pope Benedict has spoken on many occasions,’ said the bishop. He went on to say that this was nothing new and, indeed, Bl. John Henry Newman had spoken nearly two centuries ago about the dangers to the faith posed by liberalism and religious indifferentism.

After Mass, Bishop Drainey led the procession through the narrow streets of the city, as pilgrims prayed the Rosary. Passing St Margaret Clitherow’s house and her shrine in The Shambles, the line of people crossed Ouse Bridge where the bishop drew attention to the site of St Margaret’s martyrdom, now marked by a plaque. The procession reached the Church of the English Martyrs where Solemn Benediction was celebrated. A relic of St Margaret’s hand, which was kindly lent by the Sisters at the Bar Convent, was exposed for veneration by the faithful.

LMS General Manager Mike Lord commented, ‘The pilgrimage was an important witness to the Catholic Faith in times when our religion is once again under attack. This was brought home by some of the negative comments made from the crowd as the procession made its way through York’s city centre. We were delighted that Bishop Drainey was able to join us and his encouraging sermon was much praised by pilgrims on what was a very successful day.’

Posted by Caroline Shaw at 18:42 No comments: 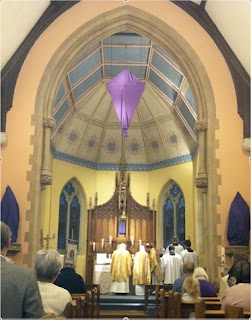 On Monday 26th March at the church of the Immaculate Conception in Devizes, a Solemn High Mass was celebrated for the transferred feast of the Annunciation.

Fr Philip Thomas was the celebrant. Fr Andrew Goodman was deacon, and Fr Jean-Patrice Coulon was sub-deacon. Fr Alexander Redman gave the homily and reflected, among much else, on the connection between the Creation and the Annunciation, the fiat lux and the fiat mihi. The choir of 11 singers, led by David and Elizabeth Bates and Rupert Bevan, sang Victoria’s Missa Ave Maris Stella. At the Offertory they sang a motet, Ave Maria, by Robert Parsons, and during Holy Communion the Ave Virgo Sanctissima by Francisco Guerrero.

Around 60 people attended – most also stayed on to enjoy the refreshments provided afterwards. It was a beautiful Mass, and a wonderful celebration of this very important feast.

Posted by Caroline Shaw at 18:49 No comments: 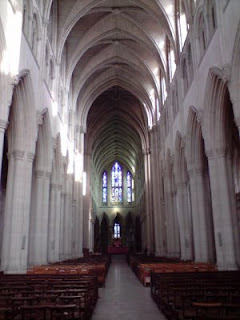 On Saturday 5th May there will be a Solemn High Mass at Downside Abbey, celebrated by Dom Boniface Hill.
It will take place at 11am.
The Abbot will preach, and the St John's Festival Choir will sing the Missa 'O Rex Gloriae' by Lobo. At the Offertory will be "Ave Jesu Christe" by the sixteenth century English recusant exile Peter Phillips, and at Communion "Ave Maria" by Clemens non Papa.
Please support this Mass and spread the word.
Posted by Caroline Shaw at 12:16 No comments: