The Exaltation of the Holy Cross – Solemn High Mass at Devizes, 14th September: report and photos. 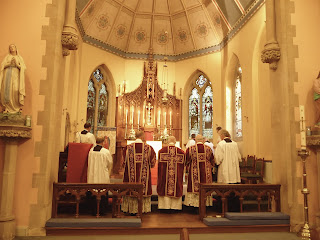 On the evening of 14th September a Solemn High Mass was celebrated at the church of the Immaculate Conception, Devizes for the feast of the Exaltation of the Holy Cross. 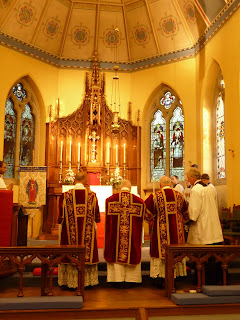 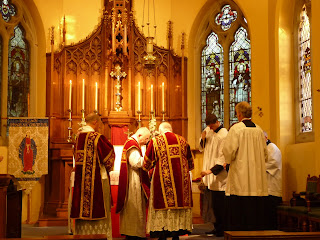 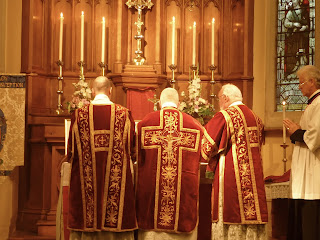 Fr Goodman preached about the triumph of the Cross. He reminded us that when Moses lifted up the bronze serpent in the wilderness to save his people it was a foreshadowing of Our Lord being lifted up on the Cross. He said that to accept and to embrace the Cross in our lives is a mark of a maturing faith. When we cease to fall back upon despair, blame and self-pity, and instead turn to Our Lord and take up our own Cross, we conform our will to His, and share in His work of salvation. It is then that the sign of the Cross becomes triumphant. 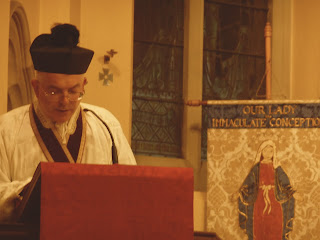 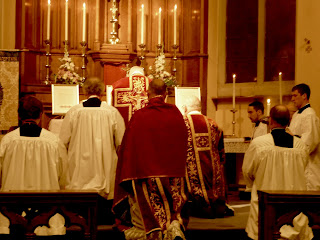 The great feast of the Exaltation of the Holy Cross, which in past times was also known as Roodmas, was observed in Rome before the end of the seventh century. It specifically commemorates the recovery of the Holy Cross, which had been placed on Mt. Calvary by St. Helena and preserved in Jerusalem, but which had fallen into the hands of Chosroes, King of the Persians. The precious relic was recovered and returned to Jerusalem by Emperor Heraclius in 629.
When Heraclius carried the Cross back to Jerusalem on his shoulders, he was clothed with costly garments and with ornaments of precious stones. But at the entrance to Mt. Calvary a strange incident occurred. Try as hard as he would, he could not go forward. Zacharias, the Bishop of Jerusalem said to the monarch: "Consider, O Emperor, that with these triumphal ornaments you are far from resembling Jesus carrying His Cross." The Emperor then put on a penitential garb and continued the journey. 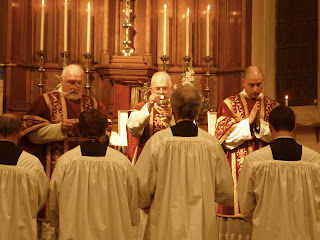 We are most grateful to Fr Coulon for hosting the Mass, to Frs Goodman, Thomas and Redman for celebrating, and to the servers, choir members and organist for providing their support for what was a most beautiful and uplifting evening. 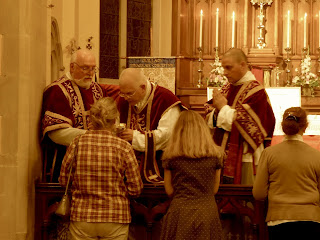 Posted by Caroline Shaw at 15:00 No comments:

Mass for the Nativity of Our Blessed Lady at Glastonbury – report. 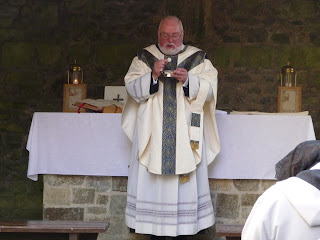 Fr Philip Thomas celebrated Mass for the Nativity of the Blessed Virgin Mary in the crypt chapel at Glastonbury Abbey on Saturday 8th September. 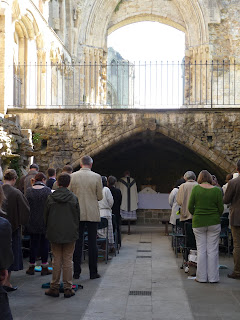 We were blessed with beautiful sunshine, and the largest congregation we have yet seen at this Mass. 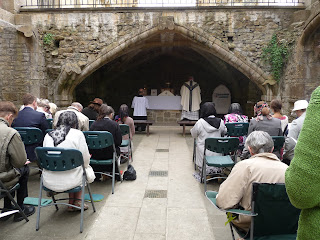 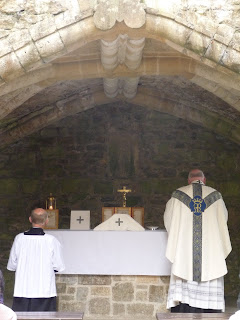 Fr Philip preached on Our Lady as Stella Maris – the Morning Star, who precedes and lights the way to Our Lord. 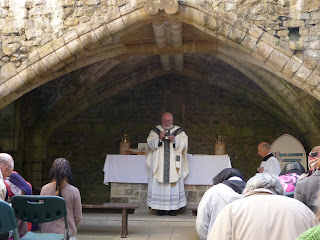 Afterwards, many stayed to enjoy a picnic in the grounds of the ruined Abbey. This is now an annual LMS event - Glastonbury Abbey, with its strong Marian associations, is a wonderful place to celebrate Our Lady's birthday.

Posted by Caroline Shaw at 12:39 No comments: