At the biennial General Assembly of the International Federation Una Voce (FIUV), the international body representing lay groups attached to the Traditional liturgy, Mr James Bogle, barrister and former Chairman of the Catholic Union, was elected President. Mr Bogle is also a Committee member of the Latin Mass Society. The LMS is a founding member of FIUV in 1965 and its largest member. Dr Joseph Shaw, Chairman of the LMS, was elected Treasurer of FIUV and Mr Thomas Murphy was elected the Secretary. Mr Thomas Murphy, belongs to an Irish association member of FIUV, St Conleth’s Catholic Heritage Association, and the FIUV Council includes members from North and South America, Poland, Russia, Spain, and the Philippines. Matthew Schellhorn, LMS Local Representative for Southwark North, was co-opted to the FIUV Committee. Matthew also organised a professional choir to provide some superb music for the various liturgies during the FIUV Assembly.


The retiring President, Mr Leo Darroch, had held the post since 2007.


During the General Assembly the Federation was addressed by Cardinal Castrillon Hoyos, and had Mass and Vespers in the Chapel of the Choir, in St Peter’s Basilica. Walter, Cardinal Brandmüller and Archbishop Guido Pozzo were among the celebrants. 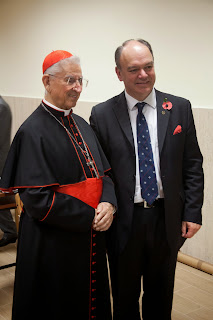