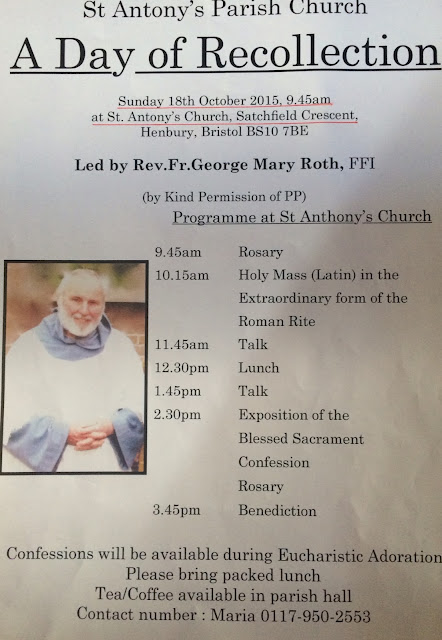 Pictures of the Mass held at St Benedict's, Stratton-on-the-Fosse on Sunday, 6th September 2015.

This is held on the first Sunday of each month at 11:15 am in St Benedict's Church.  As from the month of December this Mass will be held in the crypt chapel at Downside Abbey.  The timing remains the same. 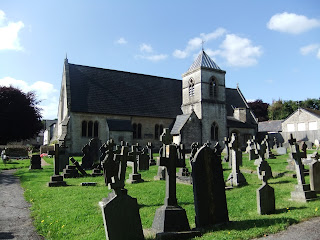 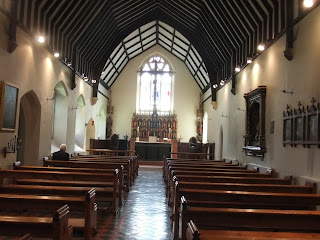 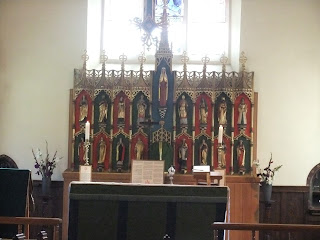 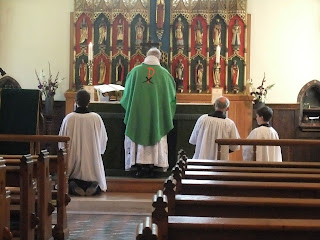 On the morning of the Glastonbury Pilgrimage we woke up to low cloud and drizzle.  Not promising as the Lady Chapel at Glastonbury Abbey has no roof – therefore open to the elements.   We passed through a heavy rain shower on our journey there but as we approached Glastonbury a watery rainbow appeared in the sky and we took that to be a hopeful sign. 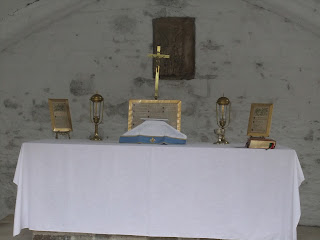 In deed by the time the Mass took place at 11:00 am it had all but stopped raining and at times we glimpsed patches of blue sky.  During the Mass we only experienced a couple of short light showers interspersed with some sunshine.  Roughly about forty pilgrims turned up, which included a large number of children, which was lovely to see.  We also had some people who were visiting the Abbey and decided to stay for the Mass. Pilgrims came from within the Clifton Diocese ranging from Bristol, Gloucester, Warminster, Devizes and Forest of Dean and others have travelled from further afield including Rural Dorset and North Devon. 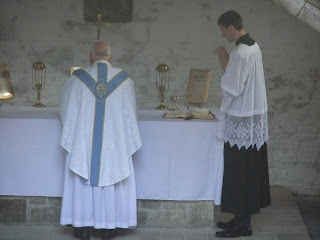 Fr Philip Thomas was the Celebrant and Douglas Thurlow the MC. 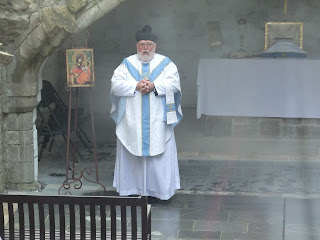 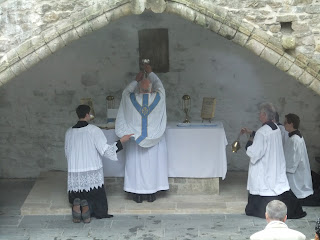 Fr Philip in his homily spoke about the need to pray to Our Lady for help in these difficult times and to evangelise our Christian Faith which was very appropriate as I was sat up on the walkway above the Chapel (in order to take photos)  and there was a stream of visitors passing through.  They included couples, families and even a dog.  Without exception all showed respect, even the dog did not bark!  Some stayed and watched for a while, others passed through. The Rupert Bevan Singers were directly under the walkway and the sound of their singing floating on the air was truly amazing.  Looking down from above it seemed almost surreal to see this lovely reverent Mass being held in the setting of this 12th century Chapel of Our Lady. 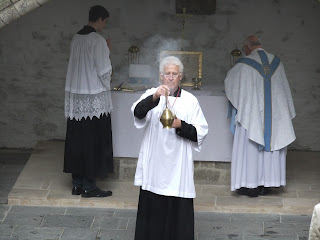 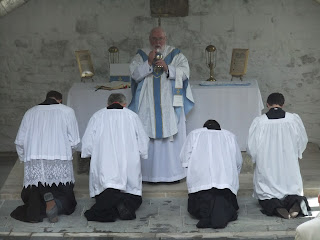 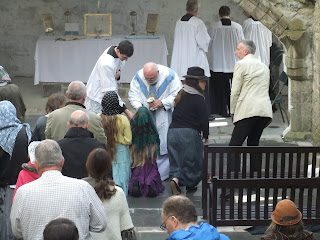 Due to a clash with another event a brass band started playing just as we were due to commence our Rosary procession round the Abbey grounds.  We had been assured that they wouldn’t start playing until later but unfortunately some things are out of our hands.  Fr Philip quickly improvised and decided that rather than try and compete with the band which as he said ‘Was bigger than us!’ we would say a Rosary in the Chapel.  So we said the ‘Joyful Mysteries’ and as we started the band began playing ‘Jesus Christ Superstar’ at the same time. Quite opportune really! 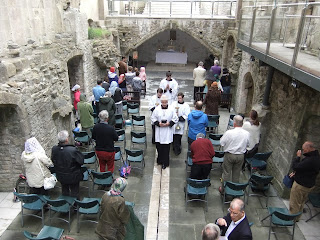 We then had lunch, some opted to picnic in the grounds as the weather had improved slightly and others went over to the Church Hall of the Our Lady of Glastonbury where we were very kindly provided with tea and coffee.  At 2:00 pm we had Benediction in the Church at the Shrine of Our Lady.
We would like to thank Fr Finan for allowing us to use his Church and Kim and Maggie who kindly provided us with advice and hospitality.  Also the Abbey Trust for the use of the Lady Chapel. Last but not least we would like to thank Fr Philip Thomas for celebrating the Mass and for the support of all the servers.

Change of Date for Mass at Holy Redeemer, Salisbury

Any inconvenience is regretted.

Reminder for the LMS Pilgrimage to Gastonbury - 12 September 2015

The LMS Pilgrimage is taking place on Saturday 12 September 2015 commencing with a sung Mass at 11.00am in the Abbey Grounds. Details are below. The LMS Pilgrimage to Glastonbury


There will be a Sung Mass in the Extraordinary Form on


The Lady Chapel in the Abbey Grounds, Glastonbury


followed by a Rosary Procession, Lunch and then Benediction at 2pm in Our Lady of Glastonbury Church


The Celebrant will be Fr Philip Thomas


The music will be provided by the Rupert Bevan Singers


Tea and coffee will be available afterwards in the Church Hall, please bring a packed lunch

Email ThisBlogThis!Share to TwitterShare to FacebookShare to Pinterest
Labels: Clifton Diocese, Glastonbury, Latin Mass, LMS Pilgrimage
Newer Posts Older Posts Home
Subscribe to: Posts (Atom)
Welcome to the information blog about traditional Catholicism in the Diocese of Clifton. We hope to provide basic information about the Masses available in our Diocese, and posts on Catholic history and culture in this area.
If you want any more information, please do contact us at clifton@lms.org.uk.